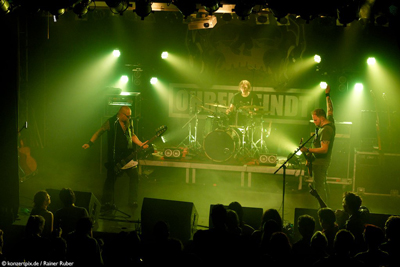 The pedal to the metal – OHRENFEINDT’s guitars are flying low. Small, smoky clubs are their habitat – and so are big stages. Insistently, the St. Pauli boys have gathered a community of faithful fans. They played with Krautrockers Birth Control, NYC’s Popa Chubby, Australian rockers Rose Tattoo, Nazareth from Scotland, North German rock legends Torfrock, the medieval metal outfit In Extremo, and, last but not least, German punk icons Die Toten Hosen.
Their rock’n’roll gods are, e.g., AC/DC, Social Distortion, Herman Brood, or Johnny Cash. Harp, bottleneck guitars, phat riffs, a thundering rhythm section and a raspy voice – this is the simple formula for their full throttle rock, being hard as a bone and going directly to your stomach, your legs, and, maybe, your head, too.

OHRENFEINDT were awarded with radio broadcaster Rockantenne Bavaria’s “Rocko” as “Best Newcomer” in 2007, came in second as “Best National Act”. Moreover, they were the only artist making it into the top ranks of all categories available. Their album “Schwarz auf Weiss” (released 2011) entered the German Media-Control charts at no. 53. Over the year 2011, the album ranked no. 12 of the Media Control Indie Newcomer Charts. The “Auf die Fresse ist umsonst” album (2013) peaked at rank no. 35 in the German Media-Control charts, the 2015 album “Motor An!” at rank no. 36.